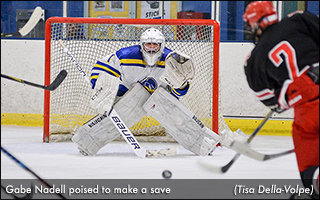 Delaware controlled the puck and the pace from the outset, working out of their own zone with little trouble for the duration of the game. At the 4:53 mark, first-line winger Nick Scafidi tapped the first Delaware goal past Rutgers-Camden goalie Dan Flaherty off a rebound from the right edge of the crease. Third-line centre Dylan Garrett contributed the Hens’ second at 9:29, receiving a centering pass in the low slot from Jonathan Madia directly behind the net. Luke Hussey got one back for Rutgers-Camden at 10:13, accelerating into the Hens’ zone up the left side and finding the back of the net over Delaware netminder Gabe Nadell’s left shoulder.

After outshooting the Scarlet Raptors 18-4 in the first period, Delaware kept the pressure on in the second to extend their lead to 3-1. Marty Coverdale notched his twelfth of the season at 3:01 with a successful redirect of a Ryan D’Emelia long-range shot. D’Emelia earned his sixth goal of the year at the 1:12 mark of the third, connecting on a one-timer in the mid-slot via Shane Saladis. The Hens accounted for 53 shots on Flaherty, who saved 49 in defeat. Nadell saved 14 of 15 shots faced, improving to 4-3 on the season.

Delaware travels to Connecticut for a weekend set, facing Fairfield on Saturday night (Jan. 27) before squaring off against Quinnipiac on Sunday afternoon (Jan. 28).