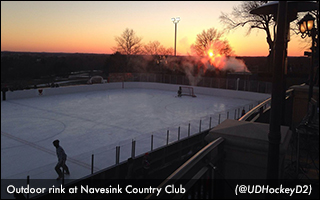 Rowan controlled possession and territory for the first 6-1/2 minutes of the game, but were kept scoreless before the Hens were able to break out of their end in earnest.  A tripping penalty assessed to Sam Meyer in the ninth minute gave Delaware their first power play, but while they could not convert with the man advantage, sophomore winger RJ LaSpina kept the momentum going to redirect a Billy Jenkins shot past Rowan goalie Justin Natiello at 11:39.  Almost immediately, the Profs regained momentum, but struggled to beat Odgers before Nick Ramos connected from the left dot at 15:52 for the equaliser.  Aaron Segnello put Rowan up 2-1 at 18:44 with a second-chance goal from directly in front of the crease.

Ramos earned his second goal for Rowan at 4:53 in the middle frame, deflecting a John Simmons shot from the low slot past Odgers before Ryan Morse responded 4-1/2 minutes later with a short-handed slapper from the mid-slot to cut the Profs’ advantage to one.  From that point, Rowan refused to look back, with Sam Ahern reaching on the power play at 9:57 from a cross-ice pass into the slot and Bobby Penrod batting a rebound in from the left side of the cage at 19:55, increasing their lead to 5-2 at the conclusion of the second period.

Justin Grossman got one back for the Hens at 1:57 in the third period, beating Natiello from the mid-slot.  Captain Ty Perry nearly closed the margin to a single goal in the fifth minute, but his laser from inside the blue line was frozen by Natiello to prevent the Hens’ forecheck from converting a rebound. Rowan accounted for the final two tallies of the game: Thurston Schon scored at 5:01 off a Zach Glanding centring pass, and captain Peter Kaz booted home the extra point for the Profs–icing a 7-3 decision–with 33 seconds to go, redirecting a Lewis Claps shot in from just outside the crease.

Next meeting:  Rowan travels to Delaware on Jan. 28, 2018 for a 3:30 p.m. game to complete their Mid-Atlantic Collegiate Hockey Conference season home-and-home.  It will air on Delaware Hockey Night radio.