Share
Tweet
Share
Share
Email
Comments
In their first season of competition in the Inter-County Scholastic Hockey League (ICSHL), the St. Mark’s Spartans have lived up to their motto of “All Things Possible” in a big way.

And while their 5-0 shutout of defending South Division champions Delaware Military Academy last Friday (Jan. 26) was certainly a big accomplishment, the task before the Spartans on Wednesday afternoon (Jan. 31) may prove to be among their toughest of the season.

The Spartans, 7-1-0 in league play after years in the Delaware High School Hockey League (previously the Delaware Scholastic Hockey Association), square off against Salesianum, who also come off a win over DMA after adjusting to a much stouter calibre of competition in the ICSHL’s Prep Division this season. Assistant coach Mike Zimny acknowledges that a tough stretch of the schedule lies ahead for the Spartans, but that they’re able to maintain good momentum.

“The team has settled into a groove; we just need to keep pushing,” Zimny says. “Over the next few weeks, every point is important.”

With further non-league matchups against the Hill School, DeMatha Catholic, and the Tatnall School ahead following Wednesday’s tilt with the Sallies, the Spartans are only focusing on one game at a time. “We need to just take the next nine games game by game,” Zimny continues. “Don’t look at the challenges ahead and just worry about the task at hand.” 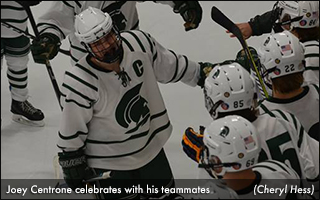 Defending Flyers Cup champion Salesianum will present the most immediate challenge Wednesday, but a strong core of upper-class leadership is bound to make their intra-state matchup more competitive than past meetings in recent memory. Patrick Swain, one of six seniors on the squad who has donned the St. Mark’s green and white since is freshman year, leads the Spartans with 13 goals and 10 assists in ICSHL play this year, while junior goalie Billy Pierce has amassed a 6-1-0 record and 2.14 goals against average to this point. Bridging the blue lines, captain defenceman Joey Centrone has accounted for seven goals of his own while controlling motion through the neutral zone on a consistent basis.

“Our strength this year comes from our upper-class leadership,” says Bob Teeven, head coach of the Spartans. “They are committed to playing at the highest level possible every time we take the ice to make our team better.”

In addition to the senior sextet, Teeven has high praise for Pierce, as well as the young talent working their way into the resurgent Spartans program.

“Billy [Pierce] has matured into a solid high-school goaltender,” continues Teeven. “He has surpassed the expectations of many around the rink.”

Sophomore winger Kelly Stroik has accounted for seven goals and 11 assists this season, while sophomore Graham Kline and freshman Will Ralsten have each found the back of the net on eight occasions. “Our underclassmen are talented, have provided great support, and have brought a strong work ethic to the team,” Teeven remarks.

Despite the new surroundings in the ICSHL after playing in Delaware-based leagues since their 1975 inception (barring the 1990s when no team was fielded), the St. Mark’s Spartans are thriving in the midst of their new challenge.

“The strength of our team this year is we are challenging ourselves, every time we come to the rink, to be better,” concludes Teeven. “You can’t ask any more from a great group of players.”

To the Spartans, all things are possible.

Their Wednesday afternoon game against Salesianum will air on Delaware Hockey Night Radio, with coverage from the Patriot Ice Center to begin at 3:45 p.m. Eastern.