A pair of goals in the 55th minute after falling behind early proved too little and too late for the Delaware Blue Hens Division 2 men’s hockey team (17-12-0), who dropped a 3-2 decision to the Rowan Profs (11-12-0) on Sunday afternoon (Jan. 28) at the Fred Rust Arena in Newark, Del. 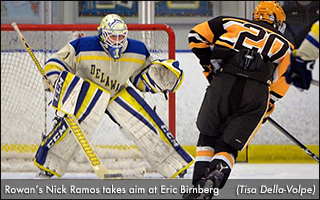 The Hens, outworked and out-hustled in the first two periods, were also outshot by Rowan, 35 to 14, in that same span.  Of note was the Profs’ ability to maintain territorial control in the slot on both ends of the ice, leading to their first two goals of the game.  Third-line centre Trevor Rucci opened the scoring for Rowan with a power-play goal 14:53 into the first period, jamming the puck under the left pad of Delaware goalie Eric Birnberg on a wraparound.  Sam Meyer increased Rowan’s lead to 2-0 at the 9:50 mark of the second, redirecting a close-up Nick Ramos chance from the right edge of the crease into the opposite corner of the net.

Meyer notched his second of the game and 10th of the season just 33 seconds into the final period, taking advantage of a Delaware bench minor to tally a second power-play goal for the Profs in five chances.  His snipe from mid-slot, ultimately the game winner for Rowan, found the left side of the net at waist height.

Facing an increasingly uphill battle, the Hens battled deeper through the middle stages of the third period, winning battles in the corners and moving the puck more fluidly than they had early in the game.  A roughing minor assessed to Rowan’s Chris McDermott at 12:57 gave the Hens the opportunity they needed to turn the momentum, as freshman defenceman Tyler Swift connected on the power play with a hard wrist shot from mid-slot for his second goal of the season at 14:20.  Thirteen seconds later, Shane Moran found the back of the net from the top of the right circle, firing point blank on Rowan goalie Justin Natiello to close the Profs’ lead to 3-2.  Delaware captain Ty Perry had the lone assist on both goals, bringing his seasonal total to 15.

Despite a further flurry of shots in the closing minutes, Delaware could not keep clear of Rowan’s defensive-zone pressure long enough to pull Birnberg for a sixth attacker, and nor could they find a third goal.

The Blue Hens have three games remaining in their regular season, travelling to Rider on Friday (Feb. 2) before hosting Scranton on Saturday (Feb. 3) and Millersville next Friday (Feb. 9).  All three games will air on Delaware Hockey Night Radio.