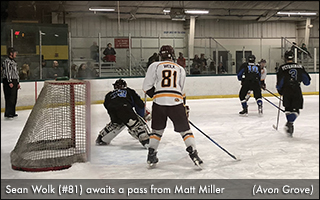 JD D’Ambrosio backstopped the Devils’ victory, recording a 15-save shutout, while afforded ample support in all three zones. The Devils maintained a presence the length of the ice, working the puck out of their zone consistently well, using an aggressive forecheck to thwart many Kennett breakout passes in either the Demons’ zone or neutral ice.

Following a scoreless first period, Avon Grove’s Josh Sepela opened the scoring 2:19 in the second with an unassisted slap shot from the mid-slot, beating Kennett goalie Morgan Cullen under her glove. The goal was the defenceman’s sixth of the year. Second-line winger Sean Wolk added a short-handed goal at the 3:36 mark, redirecting a long JT McDonald shot past Cullen from directly in front of the Kennett net. Leading scorer Ryan Nichol increased his seasonal tally to 19 at the 6:12 mark, receiving the puck from Matt Miller just left of the crease before chipping it into the top right corner of the net and extending Avon Grove’s lead to 3-0 well before the second intermission.
The Devils’ power play unit contributed the fourth and final grove of the contest at 4:24 in the third period, when Nick Ruffatt crashed the net and batted a waist-high puck past Cullen from just left of the crease.
In all, Avon Grove fired 41 shots on Cullen and kept Kennett devoid of scoring chances.
The two teams meet again on February 5, and the rematch will air on Delaware Hockey Night Radio.