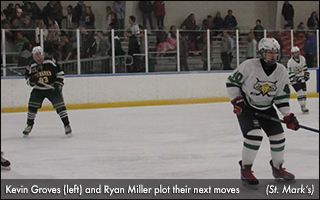 Despite freshman goalie Giovanni Casagrande giving up a Jimmy McGeoy tap-in off a turnover 1:42 into the game, he—and his Spartans—were able to find their momentum before long.  Second-line winger Kelly Stroik redirected a Graham Kline centering pass which originated from behind the goal past debuting Eagles netminder Brendan Grable to tie the game at one at the 9:54 mark, but a tic-tac-toe power-play goal finished by Shanahan’s leading scorer Tim Blajda, his 11th of the season, put the Eagles in front 2-1 with 48 seconds left in the opening period.

Not to be deterred, St. Mark’s turned the tables in a big way in the second period, notching three straight goals in the first nine minutes all from close range.  Captain Joey Centrone tied the game at two with his seventh of the season at 4:16, stickhandling through slot traffic and backhanding the puck past Grable from right in front of the crease; Kevin Groves’s sixth-minute redirect of an initial Jack Wagner shot from the left half wall gave the Spartans their first lead of the game; and freshman William Ralsten extended the Spartans’ lead to 4-2 at the 8:58 mark of the middle frame after intercepting the puck, deking to evade defensive pressure, and punching a goal beneath Ralsten’s blocker while on a power play.
As decisive as the three St. Mark’s second-period goals were, it was an unlucky bounce 178 feet away that cut their lead to one.  Shanahan defenceman Colin O’Donnell teed up a long-range shot from the left point with just under three minutes to go in the middle period, and while Casagrande made the initial save, the puck trickled over the goal line with some help from Jerry McGeoy after Casagrande bobbled it in the air.
Casagrande, who usually backs up junior netminder Billy Pierce, redeemed himself with a flawless third period, registering seven saves to hold Bishop Shanahan at bay.  In all, Casagrande made 16 saves on 19 shots faced.  St. Mark’s peppered Grable with 38 total shots on goal.
The Spartans return to Ice Line on Monday night (Jan. 15) to face St. Joseph’s Prep II.  In their Nov. 6 meeting at The Pond in Newark, Del., four different Spartans found the back of the net in a 4-3 victory.  St. Mark’s returns to Delaware Hockey Night Radio on Friday, Jan. 26, when they meet the Delaware Military Academy Seahawks for the first time this season.