The last-minute heroics of Kennett’s Drew Moskey were one-upped by Interboro leading scorer Stephen Schwartz, whose wraparound goal with 32 seconds left in regulation capped a dramatic 5-4 victory for the Buccaneers (3-2-1) over the Blue Demons (4-5-0) on Friday evening (Jan. 5) at Ice Line in West Chester, Pa. 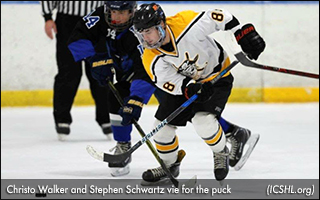 The third period did not lack for drama, with the Demons short-handed for a majority of the final 16 minutes.  Despite the disadvantage in manpower, they battled back from a 3-1 deficit to tie the game on two separate occasions.

After Kyle Robertson roofed one from the mid-slot with two minutes left in the second to cut the Interboro lead to a goal, Kayra Orankoy connected from the right point off an offensive-zone faceoff for a short-handed equaliser at 10:33 in the third period.  Unfortunately for the Demons, Orankoy would be sent off for a tripping penalty 13 seconds later, giving Interboro a lengthy two-man advantage.  The Bucs capitalised without hesitation, as Konnor Oreskovich tallied the go-ahead goal at 11:35 with a top-shelf shot from the inside edge of the right circle.

Down 4-3 with just over a minute to go, Kennett coach Todd Cullen elected to pull goalie Morgan Cullen in favour of an extra attacker on an offensive-zone faceoff.  The strategy paid off, as Drew Moskey batted a rebound from just in front of the crease past Interboro goalie Anthony Cuba to tie the game at four with 45 seconds remaining.  Just as quickly, Stephen Schwartz carried the puck into the Kennett zone, wrapped behind the goal, and emerged on the right side to punch in the game winner with 32 seconds left.

In all, Interboro registered 35 shots on Morgan Cullen, who saved 30 of them in defeat.  Cuba stopped 22 of 26 total shots faced.

The Demons accounted for 28 penalty minutes, but only gave up the aforementioned Oreskovich power-play goal.  Kennett was successful in one of their two man-up opportunities, with Christo Walker connecting on a one-timer late in the first period.

Both teams face off against their new South Division rival Msgr. Bonner in their next scheduled games: Kennett return to action Monday evening (Jan. 8) at The Pond in Newark, Del., while Interboro face the Friars next Friday (Jan. 12) at IceWorks in Aston, Pa.